Bar represents a modern town that is expanding every day. As a major port, it will impress you with its purity and arranged green areas. In its environment, there is a great number of tourist attractions. The Old Bar, Haj-Nehaj fortress, whose ruins date from 15th century and king Nikola’s castle represent historical and cultural monuments of the town. The Olive tree, that is more than 2 000 years old and Skadar lake, one of the biggest bird reserves, a large number of monasteries and churches, for visitors who prefer this type of tourism. A lot of festivals and cultural events: the International TV festival, Encounters under the Old Olive Tree, Bar Chronicle. Arranged beaches and coves such as Canj, Dobre vode will make you come back to Bar. 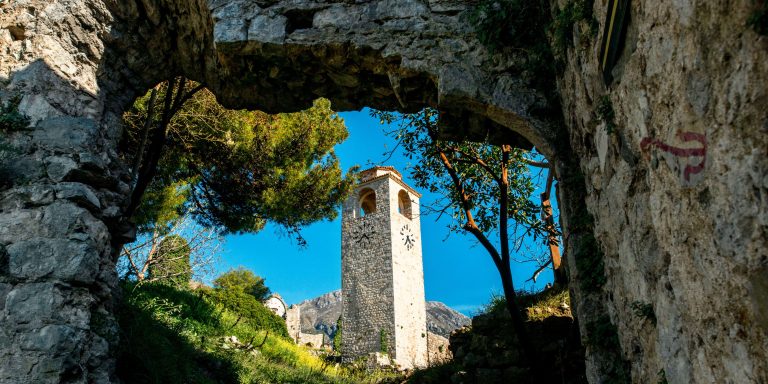 Bar is an ancient town which is associated with numerous legends. There is a little precise information about its origins.
That people lived here even in prehistoric, Illyrian, Greek and Roman era is confirmed by archaeological findings  of high quality: the remains of neolithic material found during the digging of well in the village Celuga, neolithic axe from Susanj, Velja Mogila in Susanj, tumulus in the village Ravanj, various vases in black-figure style, etc.The old Olive tree in Mirovica represents a natural monument which testifies that 2 000 years ago, there were organized settlements in these areas.
The origin of its name is differently interpreted. The Greek name is Antibareos, the Roman name is Antibarum, the Slovenian name is Bar.
It had a turbulent and interesting, “glorious” and tragic history, and frequent changes of conquerors and rulers give evidence about that.
At the beginning of the 7th century, it was inhabited by Slavs. In the 9th century, it was in hands of the rulers of Zeta who founded the first Slavic state. The capital of prince Vladimir was in Krajina (Ostros). In the 9th and 10th century it belonged to Byzantine theme Dirahion-Prevalis.
In 1042, it was liberated by the ruler of Zeta – Vojislav, who defeated in the famous “Battle of Bar” on the slopes of Rumija, a huge Byzantine army. Son of prince Vojislav, Mihailo, was crowned here in 1077, receiving the royal tag from the pope. His son and successor Bodin ruled Bar (around 1082.-1101.). With Bodin’s persistant commitment, the Diocese of Bar received a certificate of the Archdiocese in 1089. and Bar became religious centre of Bodin’s state.
In mid 11th century it appertained to Doclea and then again to Byzantium until 1183, when with the other parts of Zeta it became part of Nemanjica state. Bar remained under the rule of Nemanjica dynasty until 1360. During that time, it’s experiencing its biggest prosperity. It has its autonomy, statute, coat of arms, and even forges its own money. Stevan Nemanja Prvovjencani, in the biography of his father mentiones “The Glorious town of Bar”, and this is the first recorded Slovenian name of the town.

In the Sixties of the 14th century, Bar accepts the supreme authority of Balsic family, which created an independent territory in the area of Skadar. Jelena, Djuradj’s widow and Balsa III considered Bar as their own capital.

At the beginning of 15th century, the period of wars and regional lords begins. Afterwards Bar changes its rulers very frequently: from 1404. the Venetians, from 1412. the Balsic again, from 1421. the Despot Stefan Lazarevic, and from 1427. the Despot Djuradj Brankovic-when Bar once again becomes the capital of Zeta.

In 1443, the Venetians finally conquer the town with the coastal regions, taking it away from Stefan Vukcic Kosaca, but in 1571. the Turks conquered it, under whose authority remains for the next 307 years, up to 1878, when the town is released by Montenegrian people. During the liberation, Bar was quite destroyed. Then a certain proportion of population moved to the coast- Pristan, where the new town was developed in early 20th century.

The Ministerial Council of the Principality of Montenegro, in 1908. decided to a new town – Bar. The famous “Chronicle of the Priest Dukljanin” or “Geneology of Bar”, literary and historical document, the oldest document of its kind in the culture of the South Slavs is produced in Bar in 12th century. Popular sayings and historical legends  can be found there starting from the arrival of the Slavs to the mid 12th century, concentrating mostly on the past of Zeta.

Situated on a steep cliff, inaccessible from three sides, in the base of mountain Rumija. Defensive position and a source of drinking water, were the most important reasons why the old Bar, unlike other cities on the coast, is at about 4 km away from the coast.
This town, the citizens of which lived on handicraft, trade and cultivation of olives, has been successfully constructed over the centuries. The oldest parts are on the protruding plateau of a cliff, where there is the town gate from 10th-11th century. Not far away, separated from the inhabited part, is Citadela, which had exclusively defensive character.In the town you can still find the remains of many churches of different styles from different periods. The foundations of the Roman-Gothic cathedral of St. Djordje from 11th century are preserved, then two Gothic churches of St. Katarine and St. Venerande. From the Turkish period there is a powder magazine and amam (bath). 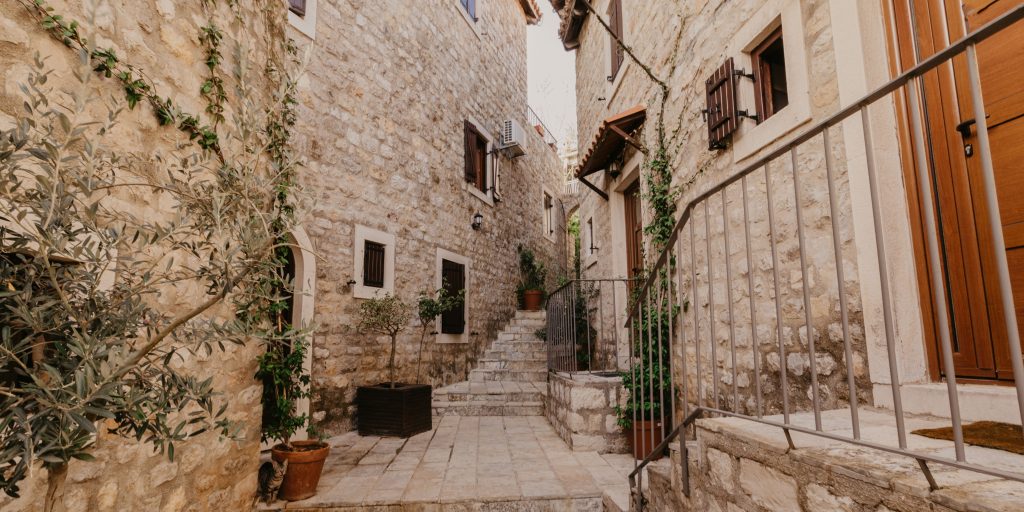 The western part of the town was found later, first in 14th century, then at the time of Venetian rule in the 16th century. In this part of town are the ruins of St. Nikola’s church, which was probably erected in the 13th century by Jelena Anzujska, wife of Serbian king Uros.
On a small crossroad square in the downtown area, is a well-preserved church dedicated to St. Jovan Vladimir.

Outside the town, north of the upper fortress, are well-preserved remains of the aqueduct from the 16th and the 17th century, waterworks that brought water from the mountains to the town.
The most recent archaeological excavations revealed pottery from 8th-6th century BC, from the time when here was an Illyrian settlement. 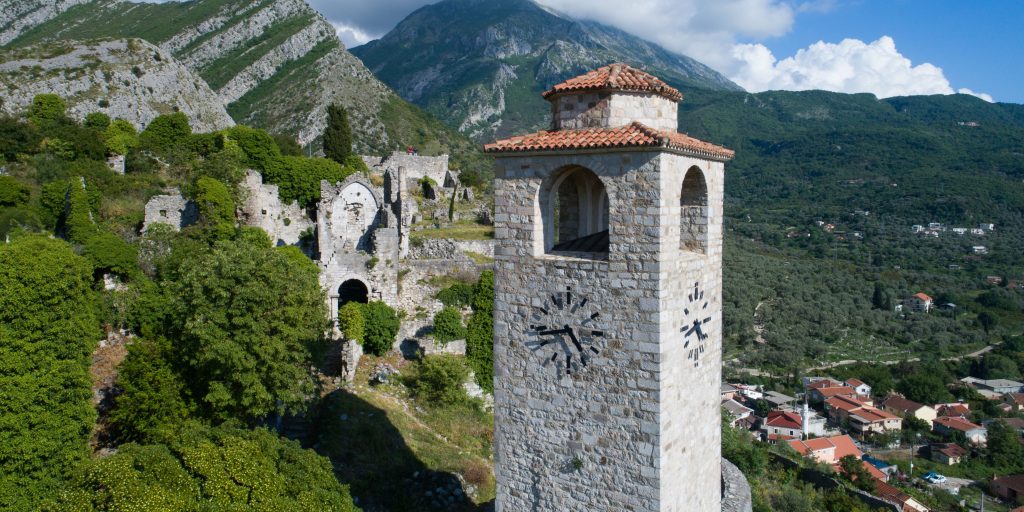 Built in 1885, on the coast. It is consisted of a large castle, little castle, chapel, a guard house and winter garden. In 1910. a spacious dance hall was erected. Within the castle there is a park with a large number of Mediterranean vegetation (among other things cork wood).
A big wooden pier is built in front of the castle, and it was used for putting boats and yachts to shore, and there king Nikola welcomed and accompanied important people who visited him in Cetinje.
From 1866. to 1916. he had ten yachts. One of them – “Sibil”, he bought from novelist Jules Verne, and his latest yacht, “Rumija”, was sunk in 1915 by the Austrian gunboats, in the place of today’s town marina.
Today the castle represents a Native museum. In the park of the castle the train “Ciro” is located, with two locomotives and two passenger wagons, out of which one was the royal family saloon car, as a memory of the railroad Bar-Virpazar, which joined traffic in 1908.It was the first railway in Montenegro, with a narrow gauge (length 43 km) and passed through the tunnel, with the length of 1969m.This railway was used until 1959.
Here is a special form of a flower garden with stainless construction, a gift from Italian king Emanuel, which now serves as a catering facility called “The Prince’s garden”.

The remains of the medieval town, built in the 15th century. It is located at a distance of about 10 km north-west of Bar, on an inaccessible hill overlooking the sea above with the altitude of 225 m.

It was first mentioned in 1542, built by the Venetians.

In the town there is St. Dimitrije’s church from the 13th century, with two altars (Orthodox and Catholic), older then the fortification. 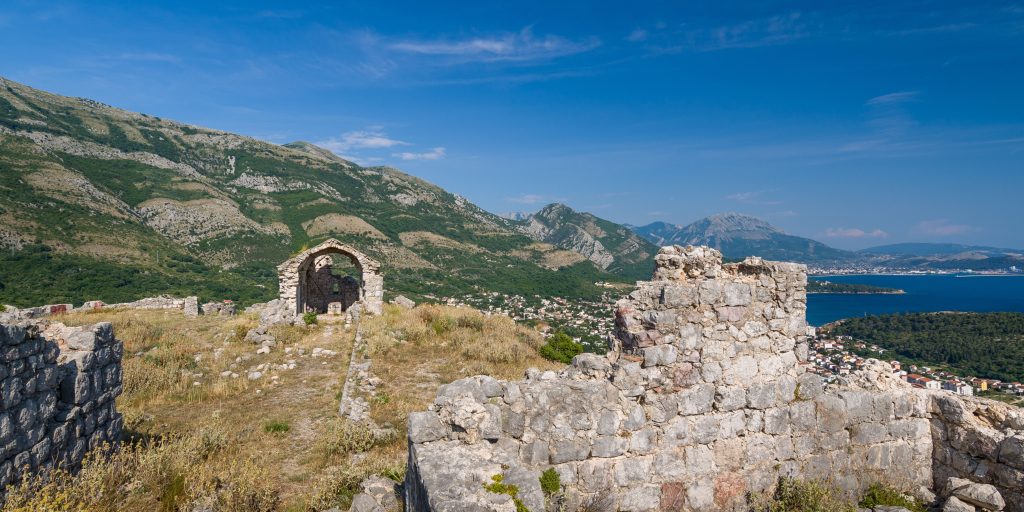