Mojkovac is a small town located in the valley of the river Tara in the foothills of mountains Bjelasica and Sinjajevina, and it belongs to Brda (Hills) of the north-east part of the Republic of Montenegro between two national parks – Durmitor and Biogradska gora. 11 000 citizens inhabit the area of 367 km2. The capital city Pogorica is 90km away and Belgrade is 380km away. Adriatic road, railway Bar-Beograd, and the regional road Žabljak – Pljevlja link Mojkovac with other towns. Town centre is 820m above the sea level and the rest of the municipality is between 750m and 2 033m. The river Tara runs through the town and its canyon is the second deepest in the world and is protected by UNESCO. 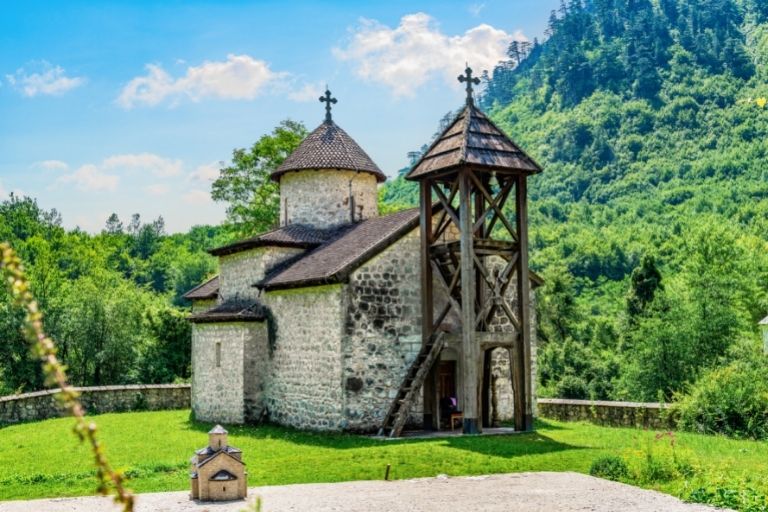 Town was established during the reign of king Uroš (1241-1276) in the heart of the parish Brskovo that was a part of Raška kingdom. Brskovo was famous for silver money that was forged so this place started to be commercial and mining center  with a caravan station between Kotor, Novo Brdo and consulate of the Republic of Dubrovnik.

In long and rich history people that inhabited place around the river Tara put up resistance to conquerors who wanted to take this land. They ran riots against foreign force and all of the rest who tried to deprive them of their liberty.

Part of the town that lies on the left bank of the Tara became a part of Montenego in 1878 after Congress of Berlin and the  territory on the right bank of the river was made part of Montenegro in 1912 during the First Balkan War, after many centuries of Turkish reign. In 1916 Mojkovac battle was fought. People defended north part of town. The battle also meant retreat of Serbian army from the First World War. Serdar Janko Vukotić put up resistance to very strong army of Austria-Hungary. In the Second World War 348 people from this town died in partisan rows and there were 7 national heroes among them. Monuments that remind us of famous past of this place are situated in the town centre, next to the bridge over river Tara. There are also grave-yards in Grotulja, Medeno guvno, Gradina on Brskovo and Bojna Njiva that remind us of  tragic events.

Mojkovac has elementary and secondary school, library with the reading-room. The town has cultural centre where Mojkovac film festival and fair are held on 19th August.

Health insurance is organized by hospitalization and curing in main hospital and in some centres in local communities. Stadium and sport centre for competitions in football, handball , basketball, and martial arts are in town centre. Alpinists that are members of club ’Brskovo’ built a mountain cottage on Bjelasica. The river Tara offers rafting and fishing and hunting on the near mountains.

Hotel ’Palas’ has 80 beds and motel ’Ravnjak’ 18 beds. In private enterprise there is about 200 registered companies and independent shops with 300 workers. Entire number of people employed is 1500 but unemployment agency has registered 2 200  unemployed citizens. Within the framework of communal activities there is a Public institution ’Gradac’ which is responsible for local water supply, local traffic and cleanness.

Development plans for this town are based on using individual possibilities: agriculture, production of healthy food, forestry. Tourism must be developed and valued on capacity that already exists. There are convenient conditions for construction of ski centre on the north-west side of Bjelasica.

Monastery St. Đorđe in Dobrilovina is the most important cultural and historical monument. It was first mentioned in 1592. It is situated 25km away from Mojkovac in direction to Žabljak. There are other items of material and spiritual culture from the past:

•  Church in Prošćenje that was reconstructed and which bishop Budimljansko – nikšićki Joanikije blessed in 2004. The construction of temple Hristovog roždestva in Mojkovac is now finished. Temple was blessed on Christmas 2008.