Bijelo Polje is situated in the valley, which is cut by mountain river Lim. Once upon a time, it was really a field, in spring covered by flowers of little white petals with yellow pestle (bijela rada, in Montenegrin language) after which  the field and the place got the specific name- Bijelo Polje (White Field). That is also the meaning of the Turkish word-for town, Akovo, which in the past was a very famous station of Dubrovnik’s’ caravans, called Nikolj fair. Bijelo Polje has the most favorable geographical location, from all other towns in the north of Montenegro. It’s situated at the crossroad of very important roads: Belgrade-Bar rail line, highway from Belgrade to the Adriatic Sea, it has good connections with towns Pljevlja and Zabljak, down the Tara canyon, to towns: Berane, Plav and Rozaje, far away to Ibar highway, Republic of Serbia, Kosovo and Metohiija. 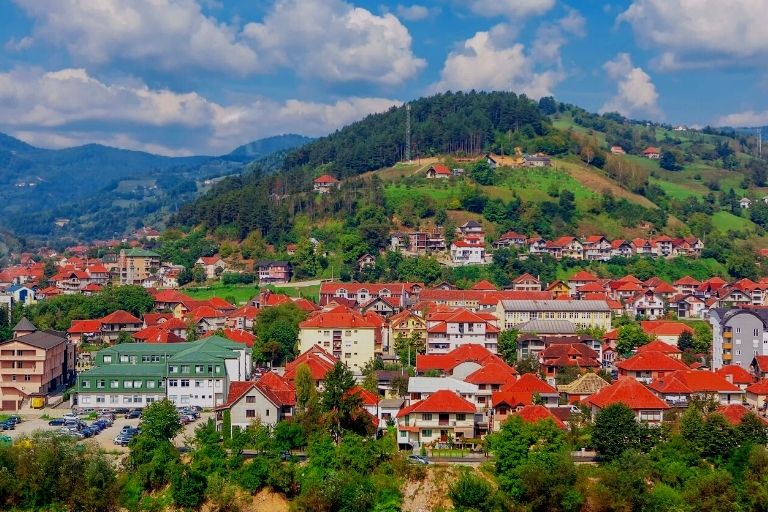 Archeological researches indicate in a very certain way, the existence of a settlement in this region, long time ago. The land of Bijelo Polje was settled down in neolith (10.000-3.000 B.C.). In village Majstorovina, in the vicinity of Bijelo Polje, an ax was found, made in neolith time. The remains of material culture were found in village Bijedici, remains which came from Bronze Age (3.000-1.000 B.C.), in village Ostrelj two axes were found, of so-called Adriatic type. According to these objects, certainly, we could say, that on nowadays area of Bijelo Polje pre-historical colonies existed. Shiny ax made of stone, was found in 1975 in Rakonje, one of suburban areas. It comes from middle-bronze age. This is a proof that  men, had lived in this area, although in old-iron age, those were all products of Ilyric tribes, whose territory took hold over most of Bijelo Polje territory. Ilyric-Roman cultural remains were found on locality alongside the church of St.Bogorodica in Voljevac. Trails of cult’s places were found in Zaton, 15 km away from Bijelo Polje, also tombstones in Dubovo. According to archeological researches, on area of Bijelo Polje, it’s really possible to speak about the existence of Roman colony on Lim’s banks. It’s very close to the center of nowadays town. Rome’s copper coin of emperor Probus, was found in settlement Pruska, from 2nd half of 2nd century .Gravestones existed on locality of Latin tombs, from 2nd and 3rd century .Shortly before the Second World War, a sacrificial altar was found on this locality with epitaph made of hard white stone in glory of Roman divine Hercules. Sacrificial altar is kept in church of St.Nikola in Nikoljac. In Roman time, on area of Bijelo Polje probably existed the municipium, with certain self-rule organization.

In this area, there are many remains of religious culture. The church of St. Nikola in Nikoljac, the church of St. Jovan in Zaton, the church of St. Toma on Brzava, the church of St. Nikola in Podvrh, the church of St. Bogorodica in Voljevac, the remains of Hajder-pasha mosque in Bijelo Polje etc. The church of St. Petar and Pavle is the most important cultural monument, it was built in 12th century. In the medieval state, the church had a very important significance, according to facts from 1254, the bishop’s chair from Stone, was removed in church of St.Petar and Pavle. The founder of the temple, duke Miroslav from Hum, brother of Stefan Nemanja, presented a gospel as a gift to the church, one of the oldest and the most beautiful handwriting, written in Cyrillic alphabet on parchment, decorated by initials and miniatures of very strong colors in gold. In church of St. Nikola in Nikoljac, fresco ensemble is completely saved. In addition to iconostasis, with special beauty and artistic value, three icons are set aside, made in 1st half of 13th century and door of Lazović painters from Bijelo Polje and other church relics. However, the greatest value of the church is the library, which keeps 84 handwritten books, 97 printed books; the most interesting is the 4th gospel, made at end of 14th century, written on parchment. In entrance of Djalović gorge, on Podvrh locality, the church of St. Nikola is situated. There a gospel of noble Divoš was found there. This book was written in glory of Bosnian noble Divoš Tihoradić. The most precious thing in the church is the iconostasis, which was admired by followers of art from Sarajevo to Paris, on Yugoslavian art exhibition from pre-history until today. In the vicinity of the river mouth Bistrica at river Lim, in the place Lozna Luka, a bridge is standing still. It was made of stone. This is the oldest monument from Turkish period. It’s very difficult to find facts about bridges on Lim, the note about the oldest bridges was probably not important to mention because they  were in the shadow of monumental medieval architecture. We can find the facts about a bridge on Lim from 15th century. In place called Vidojna, in the vicinity of nowadays settlement Rakonje, remains of a bridge were found. The bridge was very important for caravan road to Nikolj fair. On this bridge, customs existed; it was in possession of family Pripčinović. It is because of this fact that the settlement took the name-Pripčići. According to history facts, a great water took away the bridge on Lim in 1570.The bridge was of importance to military forces because at the end of the bridge there was a gate entrance to Bijelo Polje, from Sijenica and Novi Pazar direction. Watchtower existed until November in 1896, when a great flood had occurred, and it took away the bridge and the watchtower. Constantinople’s messenger (number 44, from 1896), wrote about this flood. It says the bridge was taken away by big water. The cause of the flood was a constant rain which lasted for 11 days, so the floods imperiled whole Polimlje. The level of Lim at the mouth of Drina had gone up for 15 km, in comparison to normal water level. In that time Nikoljac was cut away from town for 40 days until Lim backed in its own riverbed. As soon as the bridge was destroyed the inhabitants of Bijelo Polje started to erect a new bridge at the same place but with harder stone port in the middle of riverbed and with strong walls built around the coast. Lot of people from Bijelo Polje and the state gave money for the bridge. For example, the merchant Haji-Mile Vukojčić contributed with 650 coins and received a duty to maintain a workman until the bridge was finished. The bridge of stone wasn’t erected because they didn’t have enough money to finish it, so instead of a new, the old one was renovated- a bridge of wood with a stone step in the riverbed. According to the story of old people from Bijelo Polje, the bridge was built by Stevo Prijepoljac, who later stayed as an inhabitant of Bijelo Polje.